Jo and Monique planned their gorgeous Wedding Celebration at The Milky Way near Clovelly, North Devon.

They exchanged rings then I performed their Hand Fasting Ceremony.  Hand fasting is a wedding ritual in which the couples’ hands are tied together as a symbol of their lives being joined together.

They had made their cords from 5 different strands including a red ribbon which was decorated with dog paws representing their beloved dogs Kai and Fin.

They also included a yellow throw line (Let’s hope they will never have to paddle a river and need rescuing 20 metres apart as their new 20 metre throw line is now a few feet shorter!)

Surfer Nalu beads were attached from every beach they have surfed together and they had also woven into the cords a silver compass bead and the SAS badge which represents Surfers Against Sewage their clean beach charity. 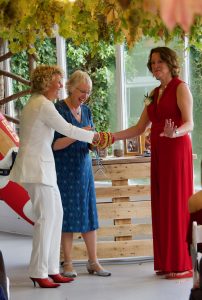 After I had tied the knot, Jo and Monique read their Vows to each other amidst much laughter and tears. 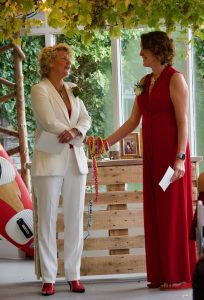